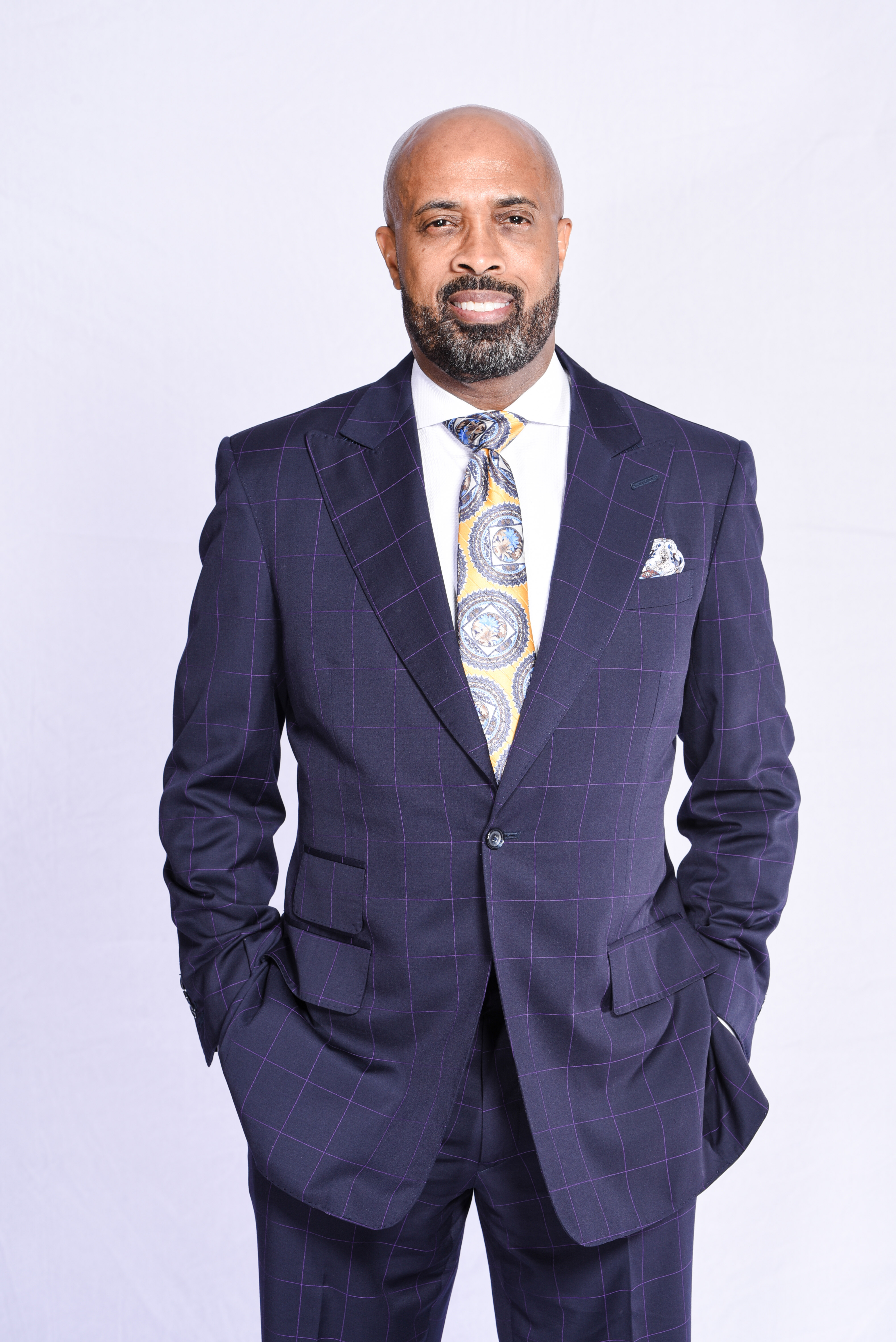 Rev. Dr. Frederick Douglass Haynes III, is a prophetic pastor, passionate leader, social activist, eloquent orator, and educator engaged in preaching the gospel of Jesus Christ, and fighting against racial injustice. Dr. Haynes is also committed to and has devoted his life to economic justice and empowerment in under-served communities and touching and transforming the lives of the disenfranchised. For the past 38 years, Dr. Haynes has served as a visionary and innovative senior pastor of Friendship-West Baptist Church in Dallas, Texas. Under his servant leadership, the ministry and membership of the church has grown from less than 100 members in 1983 to over 12,000.

On November 10, 1960, Rev. Dr. Frederick D. Haynes, III was born in Dallas, TX to the late Rev. Frederick D. Haynes, Jr. and Lynetta Haynes-Oliver.  After experiencing racism in the segregated south Dr. Haynes' father decided it was best to move his family to San Francisco where his father, Dr. Frederick D. Haynes Sr., pastored the historic Third Baptist Church. In San Francisco, both Dr. Haynes' father and grandfather led ministries that were socially conscious and active in the community.  At the age of 14, Dr. Haynes' life took a drastic turn when his father passed away on his first day of high school. Following his father's death, Haynes encountered many difficulties but with the help of mentors, his family, and God, he was able to overcome every obstacle. Despite being discouraged by a teacher’s negative assessment of his academic ability, he was one of three valedictory speakers when he graduated from Abraham Lincoln High School in San Francisco. Dr. Haynes continued his education at Bishop College, an HBCU which was formerly located on the campus where Paul Quinn College now resides. While a student at Bishop College, he also became a member of Alpha Phi Alpha Fraternity, Inc. and in 1982, earned a Bachelor of Arts degree in Religion and English. Dr. Haynes also earned a Master of Divinity degree from Southwestern Baptist Theological Seminary as well as a Doctor of Ministry degree from the Graduate Theological Foundation where he was afforded the opportunity to study at Christ Church, Oxford University in England. Dr. Haynes is currently pursuing a Doctor of Philosophy degree in African American Preaching and Sacred Rhetoric. He also serves in the academic arena, having taught college courses, seminars, and workshops at Paul Quinn College, Texas Christian University, McCormick Theological Seminary, New Brunswick Theological Seminary, and other institutions of higher learning.

In 1983, Dr. Haynes accepted the call to become Senior Pastor of Friendship-West Baptist Church. Since then the church has grown numerically and in ministry to the Dallas community and around the world. Under Dr. Haynes’ leadership, Friendship-West has moved three times in order to accommodate its growth. When Friendship-West moved to its Kiest location, it moved to a community characterized by crime and violence.  Dr. Haynes led Friendship-West to work with local officials and neighborhood groups in such a way that the community experienced a decrease in the crime rate. In addition, the neighborhood association was organized and headquartered at Friendship-West. Many city services also moved to that area which had been historically neglected and underserved. As a result, the community was transformed.

Friendship-West outgrew the Kiest location and moved to its present site on Wheatland Road on January 1, 2006. After the move, the Kiest location was transformed into the Frederick Douglass Human Services and Justice Center. As the name suggests, the church continues to address and meet the needs of the local community. After trips to Zimbabwe and South Africa, Dr. Haynes led Friendship-West to adopt churches in both countries. As a result of support and assistance from Friendship-West, the Emmanuel Baptist Church has been able to build a worship facility, school, and health clinic. In 2010, Dr. Haynes went to Haiti in the aftermath of the tragic earthquake, and Friendship-West adopted a village that has since created fresh water resources through the construction of wells.

A committed activist, Dr. Haynes has formed alliances with local and national community leaders and city, county, state, and federal officials to fight social injustice, domestic violence, and poverty. He worked with the Center for Responsible Lending in order to fight economic predators in Texas and across the nation that engage in predatory lending. Under the Obama presidential administration, Dr. Haynes was frequently invited to the White House in order to address issues ranging from the state of the economy to voting and civil rights. Birthed from the vision of Dr. Haynes, Friendship-West founded the THR!VE Intern and Leadership Program. During the first year, the THR! VE Intern and Leadership Program employed nearly 100 young black males between the ages of 16-19. Since its inception, the program has expanded and now employs both young men and women. The young people intern with local businesses and the church and are paid a rate above minimum wage, while receiving mentoring and engaging in community service. Dr. Haynes was publicly applauded by Former President Barack Obama for the created and success of the THR!VE Intern and Leadership Program.

As a reflection of his commitment to community transformation and social consciousness, Dr. Haynes serves in various leadership capacities in organizations that champion social change and education and are dedicated to the advancement of those in underserved and minority communities. In 2003, he founded the Samuel DeWitt Proctor Conference along with Rev. Dr. Jeremiah A. Wright Jr. and Dr. Iva E. Carruthers and currently serves as co-chairman of the board. The Samuel DeWitt Proctor Conference is a national organization of pastors, activists and community leaders committed to social justice by nurturing, sustaining, and mobilizing the African American faith community and working in collaboration with civic, corporate, and philanthropic leaders to address critical needs of human and social injustice within local, national, and global communities. Dr. Haynes is on the board of directors of the Conference of National Black Churches, the National Action Network, and 100 Black Men of America. He also serves as a member of the Board of Trustees of Paul Quinn College.

The community outreach of Dr. Haynes has created opportunities for him to address large audiences via radio. For many years, he hosted Freddy Haynes Unscripted on Radio One’s 94.5, KSOUL, a local radio station in Dallas. The show whose tag line was “edutainment for community empowerment” debuted at number one in its time slot in the Dallas/Fort Worth metroplex. Dr. Haynes also gave the “Inspirational Vitamin” as the concluding voice on K104’s Skip Murphy Morning Show for over 7 years. For the past 13 years, he has given the message during the Praise Break for the nationally syndicated Rickey Smiley Morning Show that reaches over 70 cities daily.

Dr. Haynes has received numerous awards and honors for his ministry and activism. In 2011, Dr. Haynes had the prestigious honor of being the featured speaker at The Congressional Black Caucus’ Annual Prayer Breakfast. In 2012, Ebony Magazine named him to its Power 100 list of most influential African Americans. He was also inducted into the National Black College Alumni Hall of Fame. In 2013, Dr. Haynes was honored to give remarks at the memorial service of one of the most respected world leaders of the 20th and 21st centuries, President Nelson Mandela. This privilege was even more special because it took place in the same sanctuary that the Rev. Dr. Martin Luther King, Jr. gave his very last sermon, the Washington National Cathedral. In 2016, Dr. Haynes was inducted in to the International Civil Rights Walk of Fame. During the 2020 Democratic National Convention, Dr. Haynes was featured during the convention’s Faith Event, Our Values, Our Voices, Our Votes. He has also received numerous awards, honors, and accolades from numerous civic, political, educational, and philanthropic organizations.

A published author, in 2007 he authored “Soul Fitness with Frederick D. Haynes, III,” an inspirational and motivational daily devotional. Dr. Haynes’ 2008 publication “Healing Our Broken Village,” addresses the issues that have contributed to broken communities and lives. Dr. Haynes’ most recent book, “Rockin’ The World With Your Words: An Essential Guide To Developing And Delivering A Life Changing Message” (2019), draws from his own experiences and outlines a plan for all speakers, novice or seasoned, to successfully craft and deliver messages that engage, inspire, and evoke change.

Dr. Haynes is married to Debra Peek-Haynes, Founder and President of Quorum Commercial, a commercial real estate firm. They are the proud parents of one adult daughter, Abeni Jewel Haynes, a social media and marketing professional.